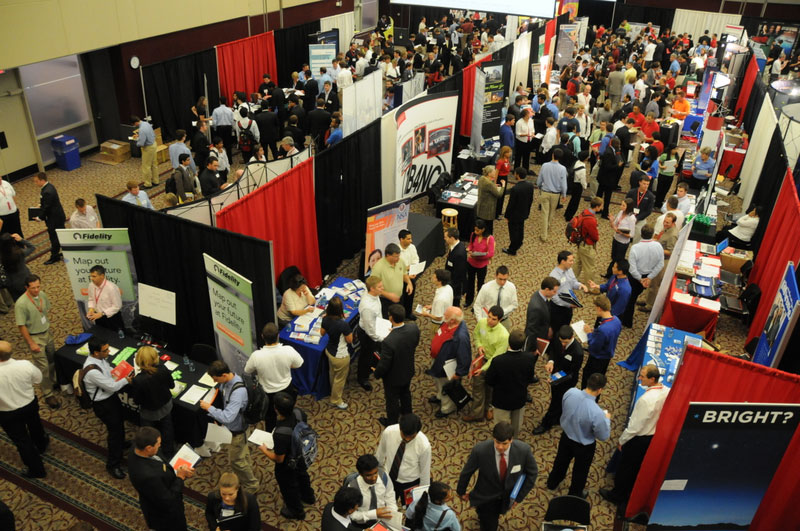 Many people look back on their college days, if they can remember them, with fond memories. During that initial year, no one dares to think it’ll ever end. Soon enough, however, those freshmen that once thought it was a good idea to jump off their roof mature, become seniors, and anxiously set off on their respective career paths.

Career fairs often come to colleges in hopes of creating serendipitous matches between employers looking to hire and soon-to-be-graduated students looking for their first job out of school. The types of organizations that participate in such events can vary greatly, creating a unique atmosphere at each one.

Recruiting on college campuses is a tall order, especially for those recruiters who don’t have a sexy name behind them. Companies are competing with a hundred other booths at these career fairs, each trying to separate themselves from the pack in order to attract the top talent.

While everyone’s parents have probably told them to “be themselves” before their first big date, recruiting on college campuses is different. It is significantly more of a sale, one in which recruiters must convince students of the numerous benefits there are to joining their company.

With 56% of professionals ranking talent brand, or a company’s reputation as a great place to work, as the most important factor when picking a job, it is worth examining what the most successful recruiters do to attract college students time and time again.

Play to Your Audience

With hiring brand and company culture being among the top considerations for Millenials, you need to find a way to relate to them. Figure out the aspects of your company that appeal to the new generation in the workforce.  You can start by interviewing your recent hires to find out what they enjoy most about working at your organization.  You might be surprised to find out that insurance underwriting or medical device sales aren't the most thrilling selling points of the job.  Maybe your 23 and 24-year-old workers stick around because of your awesome vacation policies.  That becomes your pitch.

And it couldn't hurt to appeal directly to their school pride. Sponsoring a school event and asking University permission to print a t-shirt with your name and their mascot will go a long way. College students are suckers for free t-shirts.  At the very least, you're co-branding with a top organization and expanding your reach across campus. Many years later, I still have a t-shirt with the Siemens logo that I pridefully wear on game days.

While students mull around the quad or whatever common area the career fair is being held in, they’ll likely check out many of the mobile career sites of the organizations they find interesting. Surprisingly, 50% of career sites are not optimized for mobile, and only 20% of Fortune 500 companies have mobile career sites. Both of those figures are wildly unacceptable, as 68% of people ages 18 to 25 use mobile devices for search for jobs. A company looking to succeed with college campuses recruiting will make a concerted effort to have an informative, regularly updated career site.

This may seems obvious, but consider whether the school is the right fit.  I've worked in organizations where all we did was recruit from the head of talent's alma mater.  You may be gung ho on your university, but are they the best candidates for the job? Obviously nepotism is prevalent in the hiring process, but if you're solely looking for someone that used to frequent the same college bars as you, your school pride is probably best saved for March Madness.

On the other hand, you probably don't want to be sending recruiters to career fairs all across the country. Smart companies send their representatives to the specific schools or geographic locations that make the most sense for them. For example, companies looking for engineers in the northeast would probably send recruiters to RPI or MIT, which has 45% of its graduate students in the #1 engineering school in the country, rather than waste their time at schools that don't focus on engineering as an area of study. By targeting programs and institutions from which they will likely find the greatest number of interested candidates, companies can boost the odds that they will be able to hire young talent.

After the targeted recruiting is over, the analysis can begin. In order to continuously find the best candidates, companies should pay close attention to how they perform at certain schools and how those candidates perform once inside the organization. For example, the average worker today stays at each of his jobs for 4.4 years, while 91% of millennials expect to stay in a job for less than three years. If a company finds that certain schools are yielding higher retention rates, it’s worth increasing recruiting efforts there while simultaneously lowering efforts at institutions which yield low-performing employees.

Recruiting on college campuses does not have to be a stressful experience for either the recruiter or the candidate. By concentrating on what their organization has to offer interested parties, recruiters can organically pitch students on the numerous benefits of coming aboard. Additionally, analysis of results both immediately after the fair and further down the road can go a long way towards improving future recruiting efforts, as well as optimizing career sites for the new generation of jobseekers.